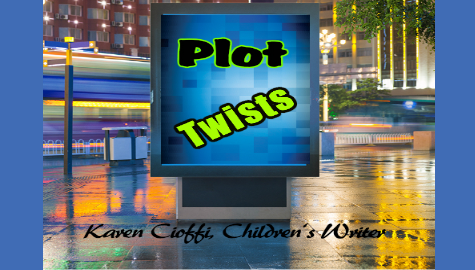 Plot twists are an established tool to writing intriguing stories, whether for books, movies, TV, or other. These helpful tools create a more engaging story for the reader.

According to Wikipedia, “A plot twist is a literary technique that introduces a radical change in the direction or expected outcome of the plot in a work of fiction. When it happens near the end of a story, it is known as a twist or surprise ending.”

Plot twists stop predictability and can be used in any genre of fiction.

So, what does that mean?

Imagine your reader, midway through the book, saying to herself, “Oh, yeah, she’s the villain. She did it.”

Sometimes this is a good thing. Some readers like to know what’s going on. They want the obvious.

People were shocked with the ending. The main characters spent most of the movie desperately running from the police. When faced with the overwhelming and at times unjust criminal system, they chose freedom … in death.

It was different and completely unexpected.

Then there’s the classics of Edgar Allan Poe.

In “The Telltale Heart,” the protagonist kills some for an old man for an insignificant reason. He cuts up the body hides the pieces under the floorboards in his house.

After a short while, he begins to hear a heartbeat … the heartbeat of the old man he just murdered, or so he thinks.

With the police there, being called by a neighbor who heard the old man scream while being murdered, the protagonist panics and confesses to the murder.

Poe did have a knack with the macabre.

There are also the subtle writers like Kate Chopin.

In her short story “The Story of an Hour,” a young woman, Louise, feels oppressed in her marriage, possibly to the point of having heart trouble.

Louise learns that the train her husband was on had crashed and there were no survivors. Locking herself in her room, she began to feel elated … free.

After a while, her sister coaxes Louise out of her room and they walk downstairs. Just then the front door opens and it’s her husband. He didn’t take the train.

Everyone in the story thinks it’s from happiness. The reader knows the truth.

Plot twists can vary and there are a number of them. The three most common, at least in my opinion, are:

With this one, the clues to solving a crime all point to one particular character. The twist is he’s innocent of the crime.

The reader thinks that he’s got it figured out, then BAM.

Chekhov is quoted as saying, “One must not put a loaded rifle on the stage if no one is thinking of firing it.”

Elaborating on this, S. Shchukin quotes Chekhov as saying, “If you say in the first chapter that there is a rifle hanging on a wall, in the second or third chapter it absolutely must go off. If it’s not going to be fired, it shouldn’t be hanging there.”

While the quote deals with a gun, it can be anything. The point here is to use details deliberately and effectively, they can lead to great plot twists.

This plot twist has the reader thinking they may know who committed the crime, but then clues point to another character. Now, the reader isn’t so sure of who the villain is.

What to Look Out For

1. One thing to keep an eye out for when writing plot twists is to be sure the reader won’t see them coming. Well, at least the majority of readers.

To help do this, quickly think of possible twists your story can take.

At Writer’s Edit, it advises, “To combat predictability in your plot, try thinking about the complete opposite of every twist or turn you’ve noted down.” (1)

2. Along with this, it’s important that your twists are believable. Don’t randomly throw plots twists into your story to try to keep your readers on their toes. The reader won’t like it.

In a Writer’s Digest article by Rachel Scheller, it says, “Readers want their emotional investment to pay off. The twist should never occur in a way that makes them feel tricked, deceived, or insulted. Great twists always deepen, never cheapen, readers’ investment in the story.” (2)

Let me take a look at it. I’m a working children’s ghostwriter and rewriter. I can turn your story into a book that you’ll be proud to be author of.

Writing for Children – Learn the Ropes

Writing Fiction – What is Foreshadowing?