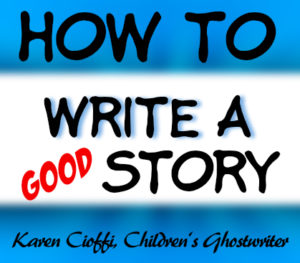 A theme is something important the story tries to tell us—something that might help us in our own lives. Not every story has a theme, but it’s best if it does.

Don’t get too preachy. Let the theme grow out of the story, so readers feel they’ve learned it for themselves. You shouldn’t have to say what the moral is.

Plot is most often about a conflict or struggle that the main character goes through. The conflict can be with another character, or with the way things are, or with something inside the character, like needs or feelings.

The conflict should get more and more tense or exciting. The tension should reach a high point or “climax” near the end of the story, then ease off.

The basic steps of a plot are: conflict begins, things go right, things go WRONG, final victory (or defeat), and wrap-up. The right-wrong steps can repeat.

A novel can have several conflicts, but a short story should have only one.

At the beginning, jump right into the action. At the end, wind up the story quickly.

Even if you write in third person, try to tell the story through the eyes of just one character—most likely the main character. Don’t tell anything that the character wouldn’t know. This is called “point of view.” If you must tell something else, create a whole separate section with the point of view of another character.

Before you start writing, know your characters well.

Your main character should be someone readers can feel something in common with, or at least care about.

You don’t have to describe a character completely. It’s enough to say one or two things about how a character looks or moves or speaks.

A main character should have at least one flaw or weakness. Perfect characters are not very interesting. They’re also harder to feel something in common with or care about. And they don’t have anything to learn. In the same way, there should be at least one thing good about a “bad guy.”

Set your story in a place and time that will be interesting or familiar.

Use language that feels right for your story.

Wherever you can, use actions and speech to let readers know what’s happening. Show, don’t tell.

You don’t have to write fancy to write well. It almost never hurts to use simple words and simple sentences. That way, your writing is easy to read and understand.

Always use the best possible word—the one that is closest to your meaning, sounds best, and creates the clearest image. If you can’t think of the right one, use a thesaurus.

Carefully check each word, phrase, sentence, and paragraph. Is it the best you can write? Is it in the right place? Do you need it at all? If not, take it out!

Let me take a look at it. I’m a working children’s ghostwriter, rewriter, and editor. I can turn you story into a publishable and saleable book.

Shoot me an email at: kcioffiventrice@gmail.com (please put Children’s Writing Help in the Subject line). Or, you can give me a call at 834—347—6700