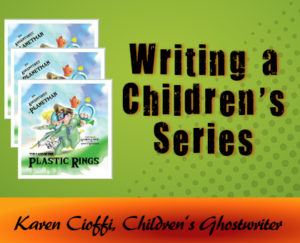 This is Part2 of writing a children’s series. And, if you’re a children’s writer of chapter books, middle grade, or young adult you can write one.

To write a series, you need three things:

In a ‘live’ workshop, Scholastic senior editor Matt Ringler noted that the most important element of a series is a strong character.

According to Ringler, the Goosebumps series is a perfect example of characters that people care about. This makes them want to read the next book in the series, and the one after that, and so on.

This is what makes a series successful.

Your story as always needs to grab the reader. It needs to hold his attention.

I can see you shaking your heads. Of course, you need these elements.

But, with the series it needs to have them consistently to keep the momentum moving forward.

So, how do you write a successful story?

According to Ringler, the most important aspect to writing a successful story is to do your research.

– Look in libraries and book stores. See what’s getting published and study those books.

– Look at similar titles in the genre your write and in the age range.

– Paying attention to comparative titles are crucial. Who published them? Who edited them?

– Know the format for the genres. This includes the word counts, age group, word levels, and so on.

– Read in the genre you write. Read at least 40 books in this genre. If you find this boring or you hate doing the research then you shouldn’t write in that genre. The research should be the fun part.

– Know what the editor edits. Know the genre he works in. If he edits chapter and middle grade books, don’t send him your picture book.

– Check out the editor’s website and try to find him on social media. You can also check Publisher’s Market Place and Book Shelf. The information you get from this research will give you a better idea of what he’s looking for and possibly how to approach him.

Next is to write and keep writing.

– Join a critique group to get other viewpoints (eyes) on your story.

– Revise, edit, slash, cut, and even start over if need be.

– When you’re finished with a project, start on the next one.

Ringler emphasized that the more books you have out there, the more potential you have for visibility and sales. If a child likes a book, she’ll want more of that book in the form of a series.

How do you know if you’re a successful series writer?

Most series have four books, some have six. This is usually the max of a successful series.

Then there is the phenomenon. These books skyrocket way beyond expectation.

“Goosebumps” has been around over 20 years and the original author, R. L. Steiner, is still writing them. As a standalone series, it may be one of the reasons for its phenomenon success.

But, again, these are the exception to the rule.

How do you measure success?

You’ll need to decide which of these meet your criteria for success.

If you’re just starting out, don’t let bad reviews hinder you. “Goosebumps was originally slammed by reviewers. So was “Star Wars.”

How many books do you need to sell to be considered successful?

Ringler gave an example of a new author, Author1, who had a 10,000-book print run. He ended up selling 20,000 books. The book was considered a BIG success.

In example two, if Author2 wants to pitch another book to that publishing house, they’ll think twice about giving him a contract.

So, success can be relative. Both authors sold 20,000 books, but one was considered a success, the other wasn’t.

I love the example Ringler gave. It something I hadn’t thought of and certainly puts sales success in perspective.

If you write chapter books, or middle grade, or even young adult, consider turning your story into a series.

To read the first part of this two-parter article on writing a series, go to:
Writing a Children’s Book Series – Different Types

Whether you need rewriting or ghostwriting, let me take a look at your story. Just send me an email at: kcioffiventrice@gmail.com. Please put “Children’s Writing” in the Subject box.

Want to Get Published? 6 Must-Do Steps