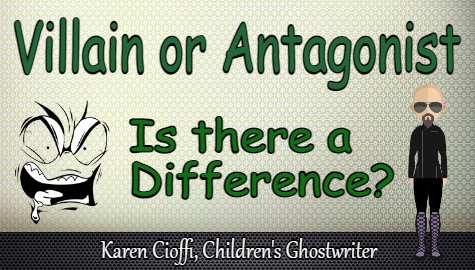 Is a villain and an antagonist one and the same? Sometimes, and sometimes not. First stop, the dictionary definitions:

A villain is: 1. a cruelly malicious person who is involved in or devoted to wickedness or crime; scoundrel; 2. A character in a play, novel, or the like, who constitutes an important evil agency in the plot.

Second, a peek on Google by searching popular villains in children’s literature (which was wicked, good fun.) A few all-time favorites:

Miss Trunchbull, the headmistress of Crunchem Hall Primary School, in Roald Dahl’s book and the film, Matilda, is the tyrannical educator who terrorizes her students with creative, over-the-top punishments.

Cruella de Vil, originally the character from the Dodie Smith 1956 novel The Hundred and One Dalmatians, who kidnaps Dalmatian puppies for their fur.
Captain Hook, from J.M. Barrie’s play Peter Pan, is a “callous and bloodthirsty” pirate. Note: In Disney’s animated film Peter Pan, Hook is more comical than the original villain.

An antagonist is: 1. A person who is opposed to, struggles against, or competes with another; opponent, adversary; 2. The adversary of the hero or protagonist of a drama or other literary work: Iago is the antagonist of Othello. (Definitions from Dictionary.com)

And now for examples of popular antagonists in children’s literature—a little harder to find. This is where the words villain and antagonist get blurred. Examples found on Pinterest include the Evil Queen in Snow White, The Evil Step-Mother in Cinderella, The Wicked Witch of the West in the Wizard of Oz, and so on. Villains or antagonists? You decide.

Does the Difference Between a Villain and an Antagonist Even Matter?

A villain is evil, through and through. His motivations are evil and his actions are evil.
An antagonist opposes the protagonist. She causes conflict with the main character.

Where the Rubber Meets the Road

In my WIP, I have crafted an antagonist. I wanted to make sure he isn’t simply a one-dimensional character. Through research and reflecting on personal experience, I think I have found a way to make him quite an interesting, and I’m hoping compelling, fellow. Below, I have used the term “villain,” but I think the same holds true for your antagonist.

Understand your villain’s motives: Make her as detailed and nuanced as your main character. Achieve this, and you’ve uncovered one of the most important keys to a compelling story. Where to begin? Get personal. Mine your personal experiences and the people you have known and expand from there.

Find a model: Your villain can be based on someone you know, a celebrity, or someone you’ve seen on TV. I’m guessing most women have had a catty gf at one time in their lives, someone who wouldn’t be considered a friend, and may have even done mean things to them. I’ve had two incidences that I know of (luckily, I’ve been spared from knowing any more than that!), one in early grade school and the other as an adult. At the time these incidences occurred I was devastated. My adult experience took me about two years to get over—after two years I said Enough! and finally was able to let go of the hold the experience had on me.

Describe your villain as carefully as you’ve described your main character: Add to your villain’s persona a drooping eyelid, a telltale scar slashed across his cheek, or something that connotes this character’s dark side.

Conjure up how your own misfortunes made you feel: Keep these feelings in a notebook. If your model is a stranger, watch how their misdeeds make the protagonist feel. Show these feelings in your story. Caveat: Little did I know that later I would be able to draw on the bad feelings I experienced to help me empathize with what mean words and actions can do to my characters. And also, how my experiences have helped me craft my villains.

Nail down your villain’s motivation: Was it something bad that happened to her in the past? Did he do something, such as steal something small, find that he enjoyed the thrill of living on the edge, and try for bigger and better spoils?

Show that your villain is fearful of something: J.M. Barrie’s Captain Hook, from his play Peter Pan, had two fears: the sight of his own blood, and the crocodile who pursues him after eating the hand cut off by Pan. In Roald Dahl’s book and the film Matilda, Miss Trunchbull is very superstitious and has an intense fear of ghosts, black cats, and the supernatural in general.

Show that your villain has a good side: Each article I researched made the point that portraying your villain as all bad risks creating a cardboard character. He will be more human if he has some good qualities. J.K. Rowling does this expertly in Harry Potter. Lord Voldemort was once a student at Hogwarts, just like the series’ hero.

Show that your villain is likeable: In Mark Twain’s book, The Adventures of Huckleberry Finn, according to Cliffs Notes, thirteen-year-old Huck Finn’s “literal, pragmatic approach to his surroundings and his inner struggle with his conscience that make him one of the most important and recognizable figures in American literature . . . He is playful but practical, inventive but logical, compassionate but realistic, and these traits allow him to survive the abuse of Pap, the violence of a feud, and the wiles of river con men.”

Have a clear idea of the conflict between the villain and the hero in your story: How does your hero thwart your villain’s main goal? At your story’s climax, your villain and hero need to confront each other alone. Make the stakes as high as possible by ramping up the obstacles the villain has thrown in your hero’s path.

Follow these guidelines and read more detailed information on the creation of your villain/antagonist by consulting the list of articles below that contributed to this post:

Linda Wilson, a former elementary teacher and ICL graduate, has published over 100 articles for adults and children, and six short stories for children. Recently, she has completed her first book, a mystery/ghost story for children 7-11 years old, and is hard at work on Book Two in the series. Follow Linda at www.lindawilsonauthor.com.

This article was originally published at:
http://www.writersonthemove.com/2018/03/villain-or-antagonist-whats-diff.html 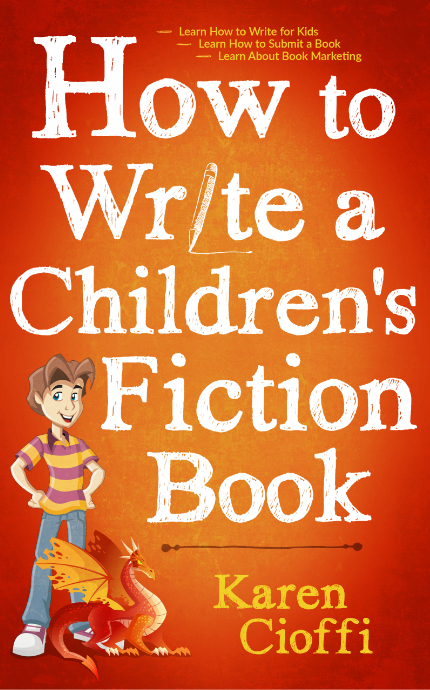 Check out Karen Cioffi’s 250+ page ebook (or paperback) that gives you all the basics of HOW TO WRITE A CHILDREN’S FICTION BOOK. It’s newly revised and includes information on finding a publisher or agent and marketing your books.

Storytelling vs. Writing a Story

One thought on “Villain or Antagonist – Is There a Difference?”