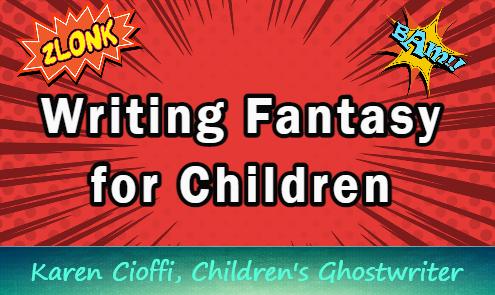 Before I get into this article, for those who don’t know the difference between science fiction and fantasy, here it is:

Science fiction is based on scientific possibilities, even if loosely based on those possibilities or far-fetched. Fantasy stories are based on magic or supernatural occurrences.

I’d say more than half of my clients want fantasy stories. And, that’s fine with me because I love writing in this genre.

Writing fantasy stories gives you free reign. Your imagination is literally your only limit.

Keep in mind though that you do need to adhere to traditional publishing guidelines when writing for children no matter what genre you’re dealing with, even if you’re self-publishing.

This means keeping the storyline and words age appropriate. It also means creating a quality story that will engage the young reader.

And as a fantasy writer, while you have free reign, you must create the rules and boundaries for the world you’re creating. Although it may be a fantasy story, the world needs to make sense to the reader.

Writing fantasy boils down to one basic question:

How do you create a fantasy world?

This is a tough question.

I think it depends in part on the kind of fantasy world you need or want to create.

With some types of fantasy stories, you’re not really creating an entirely new world, you’re stretching the existing one. An example of this is Superman. Earth is as it is, Superman simply has supernatural abilities

In these stories, the earth and society are normal. You’re adding other elements that are beyond reality or scientific possibility that turn the story into fantasy. At least this is how I view it.

These fantasies start with realistic fiction and an element of fantasy or a super-natural element is thrown in the mix.

It might be the protagonist finds ‘something’ or experiences something and it creates a ‘fantasy’ situation.

This list can go on and on. The scenarios are almost limitless.

“Charlie and the Chocolate Factory” begins with realistic fiction. An ordinary family with Charlie as the protagonist. He wins a contest and enters a world of fantasy.

Middle-grade “Walking Through Walls” begins with historical, but realistic, fiction. It starts with a boy and his family in 16th century China. Then the boy, 12-year old Wang, finds the Eternal Temple. This sets off the fantasy.

There’s also “Alice in Wonderland” and “The Lion, the Witch and the Wardrobe” among lots of others. These stories also begin with realistic fiction.

For these stories, there’s an incident or catalyst that turns realistic fiction into fantasy.

If you’re writing this type of story, you need to decide on the incident and/or catalyst that immerses the reader into the world of fantasy.

Then you need to decide on what magical or super-natural element will be created due to the catalyst.

FANTASIES THAT START OUT AS FANTASY

Some stories bring you right into the fantasy world. You’re immediately immersed into it. There is no element of realistic fiction. No catalyst or incident is required.

Think of “The Hobbit” and “Watership Down.”

The first chapter, first paragraph of “The Hobbit” reads:

“In a hole in the ground there lived a hobbit. Not a nasty, dirty, wet hole, filled with the ends of worms and an oozy smell, nor yet a dry, bare, sandy hole with nothing in it to sit down on or to eat: it was a hobbit-hole, and that means comfort.”

The reader is immediately immersed in a fantasy world and she knows it.

Even while the setting of “Watership Down” is based on a real area between Berkshire and Hampshire in England, and author Richard Adam is very explicit when describing the land he knew very well, you know it’s fantasy because of the talking animals.

But “Watership Down” is a LONG book. I have the illustrated (by Aldo Gallo) hardcover and it’s 474 pages. It was originally copyrighted in 1972. I don’t know if this type of lavishly descriptive children’s book would get a traditional contract today.

But aside from that, think of all the other talking animal books, like the Winnie-the-Pooh series, the Berenstain Bears series, “Stuart Little,” and “Fantastic Mr. Fox.” The young reader is off and running in a fantasy world from the get-go.

For stories that start out in a fantasy world, you need to decide on the element of the story that will be magical or supernatural.

Obviously, this list can go on and on, but it gives you a basic idea. The reader knows from the get-go that it’s a fantasy world.

GET THE SETTING DOWN BEFORE BEGINNING

No matter what form of fantasy you’ll be writing, get the basis for the story in place first before beginning.

Will it be a realistic world with magical or supernatural elements?

Or, will it be a fantasy world?

And, it doesn’t matter if you’re an outliner or a pantser. It would be difficult to fly by the seat-of-your-pants if you don’t have the fundamentals in place.

As an example, when I was creating the fantasy “Walking Through Walls,” while I didn’t know all the specifics, I knew it would be set in 16th century China. I knew that the setting for that time period and locale needed to be realistic. This meant I had to do lots of research.

So, even though I flew by the seat-of-my-pants for most of the rest of the story, I had the foundation down. It would be set in a realistic world.

For even more details on writing fantasy, check out the references listed below.

Whether you need help with ghostwriting, rewriting, or coaching, let me take a look at your children’s story. Just send me an email at: kcioffiventrice@gmail.com. Please put “Children’s Writing” in the Subject box. Or, give me a call at 347—834—6700

Let’s get your idea off the launch pad or your outline into a publishable and marketable story today!

Or, if you’d rather give it a shot and do-it-yourself, check out my book, HOW TO WRITE A CHILDREN’S FICTION BOOK.

One thought on “Writing Fantasy for Children”