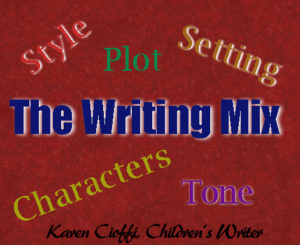 Writing can be thought of as a recipe, a handful of plot, a quarter cup of setting, a half cup of dialogue, and a half cup of action and forward movement. Then you also need to add just the right amount of theme, character, setting, and style. Stir it all together and bake for several months (might be longer, depending on your oven), and that’s it.

Ah, if it were only that simple.

Today, there are a number of rules to writing that didn’t plague writers years ago when the world was slower and people actually had time to sit and read at a leisurely pace. Writers had the luxury of setting scenes in detail and didn’t have to worry about ‘telling’ too much.

Now, publishers want your story to begin with a BAM. Grab the reader right away or you’ll lose her. And, it’s important that setting and telling are limited. In addition, don’t forget to magically weave backstory for your characters seamlessly into the mix.

So, what is the right balance of writing elements that will create a successful story?

Well, there really isn’t a pat formula. Each story will call for its own particular amounts of elements, and each publisher will have her own set of rules that the author must adhere to. But there are certain basics that all stories must contain.

The five basic elements of a story are:

Plot: The arrangement of circumstances and/or events in the story, including conflicts and resolution.

Character: Without the main character and supporting characters the plot is useless. It is the character’s struggle to overcome the conflicts or obstacles in his path that gives the plot life.

Setting: This element includes the physical backdrop of the story, the time period and location.

Atmosphere or Tone: The mood, including the setting, characters and their clothing, weather, and other elements within the story, determines the tone of the story.

Style: The author’s way of expressing herself is the style. Sentence structure, diction, choice of words, point of view, imagery, and symbols are all means of conveying a story that is unique to the author.

In regard to the amounts or balance of each element, the objective is to create a story that continually moves forward toward a satisfying conclusion while holding the reader’s attention. You can have a plot driven story or a character driven story. You can also have a story with a lot of dialogue, but you need to be sure the story is focused, coherent, and engaging.

Often, as you self-edit your own work, you won’t be able to see if the elements are just right; you should have it critiqued and have an editor take a look at it to see if you’re on the mark. And, then after all that, it will be up to the publisher’s acquisition editor to give the final say on whether you have just the right balance of writing elements for a successful story.

Getting to Know Your Characters
Plot and Your Story – Four Formats
Make Your Children’s Writing Website Focused – 3 Must-Haves, 6 Tips

3 thoughts on “The Writing Elements Mix – Is There a Right Balance?”