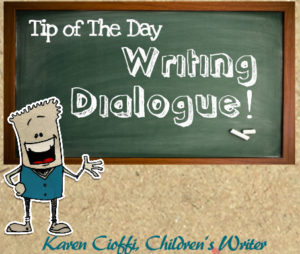 In an article over at Writer’s Digest, the author explained that ‘real’ dialogue doesn’t spell everything out.

So, what does this mean?

Well, people communicate with more than just words and often there’s a lot left unsaid in a conversation. Narration or the protagonist’s thoughts can fill in the blanks.

Here’s an example from “Crispin – The Cross of Lead” (honored with the John Newberry Medal for the Most Distinguished Contribution To American Literature For Children):

“Where’s Bear?” she asked when we entered the back room.

I made no reply, assuming Bear had told her of the attack on me, and that she felt a need to protect me. If Bear trusted her, I told myself, so should I.

Perfect blend of dialogue and narration.

With this in mind, let’s go over five of the basic functions of dialogue with the help of narration.

“Hey, Pete. Looks like you’re having some trouble with that tire. Need a hand?”

Pete leaned on the tire iron, giving it all he had. Struggling to get the lug nut off the wheel, he moaned, “I-I got it.”

So, here with a bit of dialogue and narration, it shows that Pete may have a chip on his shoulder. Maybe because he’s not as strong as the other character. He’d rather struggle than accept help. It also shows that the first character is willing ad ready to lend a hand.

“The car’s stuck in the mud. There’s no way we’re getting it out of there. It won’t budge,” said Desmond.

Brain shoved his baseball cap back on his head and walked around the car. “All we have to do is get the truck. We’ll hook on a tow line and pull her out.”

In this scene, through dialogue we learn that Desmond sees the cup half empty – he can’t see how something can be accomplished. Brian on the other hand sees the cup half full. He knows he can get the job done. Shoving his cap back and walking around the car shows he’s a guy of action. He’ll look for a solution.

The scene doesn’t have narration, but just from a simple lunch order, we know that the character is extremely picky. She knows what she wants and expects to get it.

While it’s not the same as in the movie, I got this scenario from “When Harry Meet Sally” with Meg Ryan and Billy Crystal. It’s an amazing scene.

2. Dialogue can show what a character does for a living.

Christine looked over the documents, her face growing serious. “Who’s responsible for these prints? They’re all wrong. The bathroom should be on the second floor and the living area should be an open concept. Somebody’s head is going to roll.”

“Give her oxygen and get her into the OR stat.”

Again, there isn’t any narration, but from this little bit of dialogue, we can assume the person talking is a doctor and she’s working in an emergency room.

Rachel tapped the pencil on the desk. She looked around the room. Everyone in class was busy writing. “Man, I should have studied,” she whispered.

In this scenario we can assume Rachel is a student and a bit nervous (tapping the pencil). Her class is taking a test, and she didn’t prepare for it.

Lucas shoved his gear into his bag and headed for the door.

“Geez,” said Lucas. “You never have to clean the darn garage.”

From this conversation, we know the two involved are siblings. It doesn’t, though, convey why the one brother doesn’t have to clean. Possibly the older brother has to clean the garage and has more chores. He’s also annoyed about that fact.

To give it more clarity, if it’s warranted for the story, Lucas’ dialogue can be tweaked, as long as what’s conveyed isn’t information dump:

“Geez. How come you don’t have to clean the darn garage? Just because you’re two years younger than me you get away with everything.”

4. Dialogue can show how educated a character is through choice of words.

“You need to ascertain whether you and he are compatible.”

“You need to figure out if you two are a good match.”

Simple examples, but you get the point.

5. Dialogue can show tension between characters.

Sammy dropped his books and stood with his fists clenched. “Do that one more time and you’ll never do it again.”

Dylan shook his hands. “Ooohhh. I’m scared. Do you mean don’t do this again?”

This scene clearly shows tension between Sammy and Dylan. And, it shows that Dylan is the instigator of the tension.

Sara stormed up to Alicia’s desk and slammed a folder down. “You stole my idea. Mr. Peter is doing a full campaign based on it. Tell him it’s my idea or I’ll tell him.”

Without looking up or hesitating, Alicia said, “That’s not happening. If you weren’t careless enough to leave your notes on your desk, I wouldn’t have seen them.” She pulled a lipstick and mirror out of her draw and touched up her lips. “If you go to the boss, he won’t know who to believe. He might think you’re lying to get ahead. Want to risk it?”

Again, this is a tension packed scene – that Alicia is a stinker.

There are also other functions of dialogue like conveying underlying emotions, creating atmosphere, and driving the plot forward. Using dialogue and narration allows you to paint vivid pictures. Your choice of words will give your characters and your story life.

Source:
Writing a Scene with Good Dialogue and Narration

Let me take a look at your notes, outline, or draft. I’m a working children’s ghostwriter, rewriter, and coach. I can turn your story into a book that you’ll be proud to be author of.

Just send me an email at: kcioffiventrice@gmail.com (please put Children’s Ghostwriter in the Subject line). Or, you can give me a call at 834—347—6700