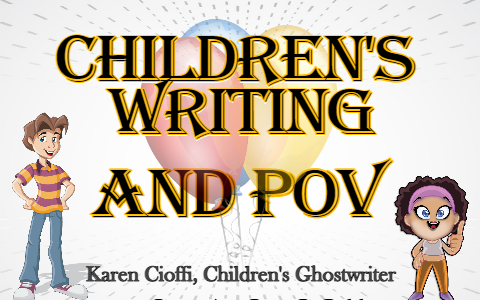 Point-of-view (POV) is the narrator’s view of what’s going on. The POV is who’s telling the story. This will determine what the reader ‘hears’ and ‘sees’ in regard to the story. And, it determines the ‘personal pronouns’ that will be used.

There are three main POVs in young children’s storytelling: first person, second person, and third person (limited). And, in each of these POVs, the protagonist (main character) must be in each scene – the story is told through his five-senses. If he doesn’t see, hear, smell, taste, or touch it, it doesn’t exist in the story.

This POV has the protagonist personally telling the story. Pronouns, such as “I,” “my,” “me,” “I’m,” are used.

Example from “Because of Winn-Dixie:”

That summer I found Winn-Dixie was also the summer me and the preacher moved to Naomi, Florida, so he could be the new preacher . . .  (The protagonist, Opal, is talking to the reader – italics are mine for clarity.)

“But you know what?” I told Winn-Dixie. (Opal is talking to her dog.)

“Well, I don’t know,” said Miss Franny. “Dogs are not allowed in the Herman W. Block Memorial Library.” (The librarian in the story is talking to Opal.)

This POV uses “you” as the pronoun, referring to the reader and isn’t used that often in young children’s writing. But, there are some authors who pull it off very well.

An example of this POV from “How to Babysit Grandpa:”

Babysitting a grandpa is fun. If you know how. (The protagonist is talking to the reader, involving him. Italics are mine.)

This POV is probably the most popular in young children’s writing. Pronouns, such as “he,” “she,” “its,” “they,” and “their” are used.

While this is similar to the other two POVs, in that they’re all told from the protagonist’s point-of-view, in third person, a third party, the narrator is telling the story. He’s privy to all the senses and emotions of the protagonist.

Here’s an example from “Walking Through Walls:”

“You will practice by walking through this brick wall. You must repeat the magic formula over and over as you go through it.” Wang looked at the wall. He tightened his fists, clenched his jaw, and wrinkled his forehead. This is sure to hurt.

“Uh,” he paused, “Master, what will happen if I do say the words to the magic formula out loud?”
“Wang, you are trying to delay your task. It is a good question though. Your tongue will cease its movement if you speak the words to the formula.”

Wang’s eyes opened wide and he flung his hands on top of his head. Never to talk again! I am sorry I asked for the formula. What if I slip?

The narrator is telling the reader what’s going on. Again, he’s privy to the protagonist’s thoughts, senses, and feelings.

When writing for young children, it’s the author’s job to make sure the story is engaging and CLEAR (easy to understand). One quick way to lose the reader is to mix and match point-of-views within the story. Even if you slip just once, you may very well throw the reader off.

One easy error is to slip in a second person POV within a third person story. How this might happen:

The third-party narrator is explaining what the protagonist did then throw in something like, Can you believe it?

That one little sentence has switched POVs and can cause confusion.

Remember to choose one POV and stick with it throughout your story.

There you have it, the three main points-of-view in young children’s storytelling. Which do you prefer?

Let me take a look at it. I’m a working children’s ghostwriter, rewriter, and editor. I can turn your story into a publishable and saleable book.

Shoot me an email at: kcioffiventrice@gmail.com (please put Children’s Writing Help in the Subject line)
Or, you can give me a call at 347—-834—-6700