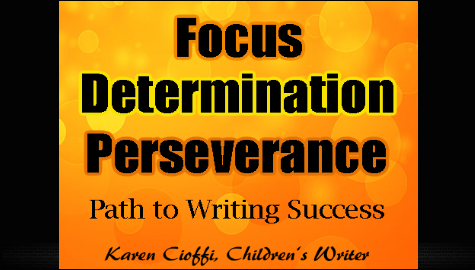 Focus, determination, and perseverance are essential to just about every aspect of your life. Each characteristic is unique and together create a powerful synergy.

Focus is one’s ability to concentrate exclusively on a particular thing through effort or attention.

Determination is an unchanging intention to achieve a goal or desired end.

Perseverance takes determination a step beyond by using steady and ongoing actions over a long period of time to ensure its intention is accomplished. It continues on through ups and downs.

These elements combined with positive thinking and projection can be an unstoppable force.

I’m a huge fan of positive thinking and projection. I believe our mind has a great influence over our well-being and the direction our life can take. Granted, it’s not always easy to harness that influence, but there is enough content out there, including The Secret, to at least strive to think positive and project.

For example, Jack Canfield and co-creator Mark Victor Hansen, of Chicken Soup for the Soul, were rejected 144 times from publishers. Finally, in 1993, their book was accepted. Since they were in debt and couldn’t afford a publicist, they did their own promotion. In 1995, they won the Abby Award and the Southern California Publicist Award.

In a teleconference I attended with Jack Canfield as the speaker, he said he and his co-author created vision boards of what they wanted. They even took a copy of the New York Times Best Selling Page, whited out the #1 spot, and replaced it with Chicken Soup for the Soul. They put copies of it everywhere, even in the toilet. They had focus, determination, perseverance, and they envisioned and projected success. The rest is history.

On a much smaller scale, my daughter Robyn, practices the philosophy of The Secret. For ten years she dreamed of being in the audience of the Oprah show. She actually got tickets twice, but for one reason or another she was unable to attend. It didn’t stop her though; she persevered and kept trying. She knew one day she’d accomplish her goal and she did. She attended O’s 10 Anniversary celebration in New York City.

She even got her picture taken. You can check it out at (she’s on the right):
http://www.oprah.com/omagazine/Photos-from-O-Magazines-Live-Your-Best-Life-Weekend/5#slide

So, what has this to do with you as a writer? Plenty.

The elements for obtaining your goals are the same whether for business, marketing, life, or writing. Just about every writer has heard the adage: it’s not necessarily the best writers who succeed, it’s the writers who persevere.

Be focused and determined on your writing goals. Have a ‘success’ mindset. This means to project success, along with taking all the necessary steps to becoming a successful and effective writer. And, don’t let rejection stop you – persevere.

To reinforce the need for perseverance, here’s a great article from LitHub that lists a number of other famous authors who had their share of rejection: The Most Rejected Books of All Time

Let me take a look at it. I’m a working children’s ghostwriter, rewriter, and editor. I can turn your story into a publishable book you’ll be proud to be the author of.

Shoot me an email at: kcioffiventrice@gmail.com (please put Children’s Writing Help in the Subject line). Or, you can give me a call at 834—347—6700.