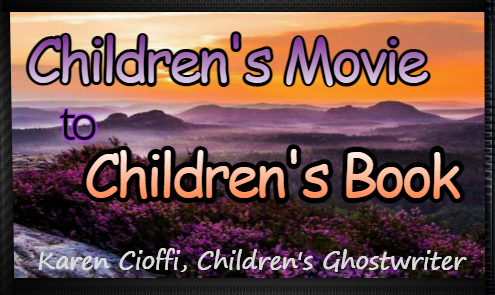 While it’s usually the other way around, book to movie, if you’re a freelance writer or ghostwriter, you may get a request to turn a children’s movie into a children’s book.

If this should arise, there’s a lot to consider, especially when most non-cartoon children’s movies have multiple POVs (point-of-perspectives).

Another problem that may arise is that there can be more than one protagonist in a movie. Think of the Little Rascals, it’d be tough to have to choose between Spanky and Alfalfa.

You can watch this trailer to see what I mean:

You have Alfalfa’s POV and also Spanky’s POV.

Or, you may have a movie with ‘bad guys’ and they have scenes in which they discuss things that the protagonist isn’t aware of.

The first thing is to talk to the client and determine what type of POV s/he wants:

1. First person – The protagonist tells the story himself:

I got up and there was the biggest monster I ever saw at the other end of my bed.

2. Third person point of view, limited – The narrator tells the story through the protagonist’s POV, but “he” and “she” is used:

Dave got up and saw the biggest monster he’d ever seen at the other end of his bed.

3. Third person point of view, multiple – The narrator still uses “he” and “she,” but now you are privy to multiple character’s POV. The key with this POV is to make sure your reader is aware the POV has changed in a particular scene.

I used this only once in a client’s middle grade story. He wanted two POVs, so I took care to write it. I create new chapters for the changing POVs.

4. Third person point of view, omniscient – Again, the narrator still uses “he” or “she” but the narrator sees all and knows all about what’s happening with every character. The narrator can also read the thoughts of any character in the story that the author chooses to expose.

If you’re writing a chapter book for ages say 7-10, I would suggest trying to convince the client to use third person, limited. Kids that young don’t need to be confused by changing POVs.

Keep in mind this will cause the most problems and work because you have to figure out how to write scenes that the protagonist isn’t aware of in the movie into scenes in the book that s/he’s privy to.

Usually, this isn’t too difficult to do, but if you have a movie scene that would end up being awkward to have the protagonist be aware of, then you might consider removing that scene from the book. You’ll have to determine how important that information is.

If it’s essential, you can relocate the scene to be somewhere the protagonist will have the opportunity to overhear the conversation or witness the action.

These are some of the things you’ll need to consider if you’re writing a children’s book from a children’s movie.

NEED HELP WITH YOUR CHILDREN’S STORY?

Check out my 200+ page ebook (or paperback) that gives you all the basics of HOW TO WRITE A CHILDREN’S FICTION BOOK. It’s newly revised and includes information on finding a publisher or agent and marketing your books.