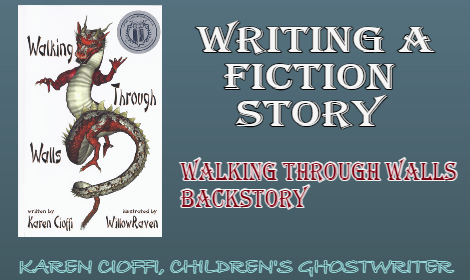 It’s always interesting how writers find ideas when writing a fiction story. Some may simply come up with an idea, others may see something that triggers a story, and sometimes a story is handed to a writer.

I had never thought of rewriting a folktale until being given a rough outline of an ancient Chinese tale, Taoist Master of the Lao Mountain. This was the inception of middle-grade, fantasy adventure Walking Through Walls.

It was June of 2008, and I belonged to a writing critique group along with a Chinese nonfiction writer who had a basic outline of an ancient Chinese tale that he wanted to pass along to a fiction writer. Since writing a fiction story wasn’t his cup of tea, he gave me the outline.

After reading the outline, I loved the lessons it could bring to children. Folktales come from all over the world and usually provide morale messages geared toward doing right, rather than wrong. These tales are a wonderful way to teach children through an engaging and entertaining story.

Since the tale, as with many ancient tales, involved an adult as the protagonist the first step needed was to rewrite it for today’s children’s market, meaning it needed a child protagonist. Wanting to stay as close to the original tale, I used some of its flavor, descriptions, and names. That’s how the main character’s name, Wang, was chosen.

Along with keeping the story’s flavor, I wanted it to be engaging for today’s child, so I came up with new characters, the dragon, enhanced storyline and plot, and so on.

Having an outline to guide me was a great help; it offered a general direction, like an arrow pointing North. So, as I began to rewrite the tale it was able to take on a life of its own, while still heading North. And, to ensure the story kept its flavor, I made sure to include bits of the original story to keep it as close to the tale’s outline as possible.

Working on the story, I knew it needed to take place in ancient China, so decided to use the 16th century as the backdrop for the story. To add an element of realism to the story, I researched ancient China, including foods, flowers, dwellings, and clothing. I also contacted the Chinese writer who gave me the outline for some additional cultural information.

I worked on the story for well over a year, revising it, having it critiqued numerous times, revising it some more, and even had it professionally edited before beginning to send it out for submissions. Fortunately for me, the timing coincided with the 2009 Muse Online Writers Conference and I signed up to have a pitch with 4RV Publishing. As nervous as I was, the pitch went well and the manuscript was accepted.

For the next year, it was more revisions, tweaking, additional elements to the story, and editing to make the middle-grade, fantasy adventure, Walking Through Walls, better than before.

Then, the story was ready for a cover illustration. Aidana WillowRaven was assigned to my book and although the dragon in my original manuscript was described as “a shimmering golden dragon,” Aidana ‘felt’ the flavor of the story pointed to a more oriental type dragon. We went back and forth a bit about the dragon’s size and shape, but Aidana’s vision of what the dragon should look like was perfect.

Now, the description of the ‘golden dragon’ in the story needed to be corrected. So, I changed the text to read, “Suddenly a magnificent dragon with shimmering red and silver scales appeared.” Done. The description of the dragon and the cover matched; we were ready to move forward.

Next came the interior design formatting, which includes the text. After blocking the text it was determined another six pages was needed to make the spine wide enough. So, I had to come up with more content.

As the story was complete, to fill the page count I came up with an Author’s Note page, four pages of Reading Comprehension, an Activities Page, and after more research, eight pages of information on the Ming Dynasty time period and the Chinese dragon.

Writing a fiction story from its inception to publication can take many paths; this is the path Walking Through Walls took.

Whether you need rewriting or ghostwriting, let me take a look at your story. Just send me an email to: kcioffiventrice@gmail.com. Please put “Children’s Writing” in the Subject box.

10 thoughts on “Writing a Fiction Story – Walking Through Walls Backstory”