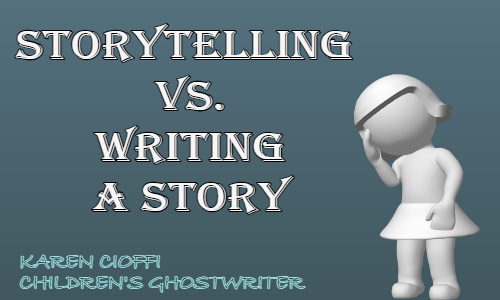 Is there a difference between storytelling and writing a story?

A children’s publisher commented on the difference between storytelling and writing. She explained that storytelling involves visual aids, whereas writing does not.

Granted, children’s picture books do provide illustrations in the form of visual aids, but they are not the same as storytelling’s visual aids.

Storytelling allows for the use of visual aids, which includes facial expressions. There is also voice tone, word pronunciation, along with word or phrase stressing that help aid in conveying sadness, anger, fear, and an array of other emotional sediments. This is also known as voice inflection.

Along with facial expressions and voice inflection, the storyteller can also take advantage of movement. Imagine telling a group of children a spooky story that has the protagonist tiptoeing around a corner to see what’s there. As a storyteller you can actually tiptoe, hunched over; and exaggerating the movement enhances the suspense. Visual aids are easy to use and are powerhouses of expressions.

Another example might be if you are telling a pirate story to a young boy. You can use toy props, such as a toy sword or pirate’s hat, while limping with a pretend wooden leg. These visuals enhance the story experience for the child without the storyteller having to create the imagery with words.

Writing on the other hand depends solely on the writer’s interpretation of what the facial expressions, voice, mannerisms, image, and body movement of the characters might be. And, that interpretation must be conveyed through words that preferably ‘show’ rather than ‘tell.’

If you think about it, storytelling is much easier than writing a story. But, most of us authors are writers, not storytellers, and as writers we need to convey emotions and activity through showing.

In the storytelling examples above, how might you write the scene as an author?

For the first scenario of a spooky story, one example might be:

Lucas grabbed his little brother’s hand and pulled him close. “Shhh. Don’t make any noise. It might hear us.” They crept along the wall, barely breathing, until they reached the . . .

While this passage doesn’t have the advantage of the storyteller’s visual aids, it does convey a feeling of suspense and fear.

In regard to a pirate story, as an author you might write:

Captain Sebastian grabbed his sword and heaved it above his head. “Take the ship, men.”

The pirates seized the ropes and swung onto the ship. Swords and knives clanking, they overtook their enemy in under an hour.

This short passage clearly conveys a pirate scene with Captain Sebastian leading his men into a battle aboard another ship. No visual aids, but it does get its message across.

You might also note that while trying to write your story through showing, you need to watch for weak verbs, adjectives, and a host of other no-nos. In the sentence above, the words, “barely breathing” would probably need to be changed if it reached a publisher’s hands. Why? Because “ly” and “ing” words are also frowned upon.

So, knowing the difference, if you had your choice, which would you prefer to be, a storyteller or a writer?

The Author Website – Do You Really Need One?
Picture Books – Story or Illustrations, Which Comes First?
Writing – Showing vs. Telling

WANT TO BE A CHILDREN’S WRITER?

Check out my 190 page ebook that gives you all the basics of HOW TO WRITE A CHILDREN’S FICTION BOOK (including finding a publisher or agent, and marketing your books)

Or, think you need more help? Check out my ghostwriting, rewriting, or coaching services!

As an author it’s your job to create an engaging, compelling, suspenseful, intriguing, romantic, or other type of story content that will lure readers in and keep them turning the pages. But the key word for a successful story is ‘engaging.’

Engagement, according to Merriman-Webster.com, means to have an emotional involvement or commitment. Based on this, no matter what genre you write in the story must hold or engage the reader.

In an article in the Writer’s Digest January 2011 issue, Steven James takes a look at aspects of “great storytelling.”

The first rule to a successful story is, according to James, “cause and effect.” In children’s writing this is the same as an obstacle and its solution – there must be a circumstance that leads the protagonist to an action in an effort to find a solution. I do like the wording James uses though, because it’s more in line with multiple writing genres.

In its simplest form, something happens (the cause) that creates or motivates an action or reaction (the effect).

James goes on to explain that along with cause and effect, the order in which an event unfolds or how it’s written will also make a difference between keeping a reader engaged and allowing for disengagement.

“As a fiction writer, you want your reader to always be emotionally present in the story,” explains James. If the sequence of an event causes the reader to stop and wonder why something is happening, even if just for a moment, you’ve left room for disengagement.

As an example, suppose you write:

She fell to her knees, dropped her head, and wept uncontrollably. Her husband was dead.

While in just eight words, the reader learns why the woman is crying, it may be enough time for her to pause and wonder – this can lead to disengagement.

To create a cause and effect scenario that keeps the reader in the loop, you might write:

Her husband was dead; the words echoed through the room. She fell to her knees, dropped her head, and wept uncontrollably.

The second aspect of writing James touches upon is creating and maintaining a believable story. Even if writing a fantasy or science fiction, consistency is needed, along with believable actions, reactions, observations, conclusions, and so on within the boundaries of the story.

A basic example of this might be if you write about a character with brown eyes, then somewhere within the story you accidently mention the eyes are blue. This little slip creates a believability gap.

Any gap in the believability of the story or its characters has the potential to cause the reader to pause, question, and very possibly become disengaged.

Let me take a look at your story. I’m a working children’s ghostwriter, rewriter, and editor. I can turn your story into an engaging, publishable, and saleable book. 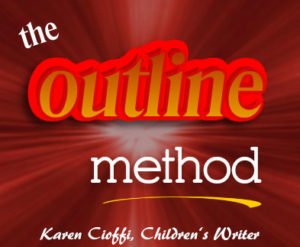 Are you an outliner or a pantser? I don’t know if there has been a study of how many writers prefer each, but I know there are many in both camps. You know the saying, “different strokes for different folks.”

If I had to take a guess though, I’d say the majority of writers/authors are outliners (plotters).

Creating an outline of a story before delving into it provides a foundation. It’s something to build upon. It’s like a map. You mark out your driving route. You know you’re going from Point A to Point B. You see the highways, roads, and so on between those two points. And, they’re all written out in your outline.

It’s interesting to know that there are different kinds of outliners. Some create full detailed accounts of getting from Point A to Point B. Some simply have a rough outline of what the story will be about – possibly that John is at A and has to get to B.

Jeff Ayers (a top crime writer), in his article “Doing What He Loves,” in the May 2009 issue of the Writer, says:

Outlining allows me time to think. Does this ever happen to you–you’re in line at the market, some pushy person cuts in front of you, you mumble something ineffectual or stupid, then when you’re 10 blocks away the light bulb goes off, and you think “That’s what I shouda said!” Well, outlining gives me the 10 blocks to think of something better.

I think this is an excellent explanation of why writers use the outline method of writing.

In the article, Ayers explains that he spends lots of time outlining. In addition to coming up with ideas, it allows him to get better acquainted with his characters. This more intimate knowledge allows him to bring them to life.

As I mentioned earlier, outlining is like using a map. But, depending on how detailed you make your outline, it can be more like a GPS. It can lead you street by street from your starting point to your ending point.

Even if you run into a detour that was unexpected, as in writing can happen, you have a guided system in place to get you back on track. And, if it’s very, very detailed, you even know where the rest stops are, where to eat, where the scenic sites are, and so on. It doesn’t leave much to chance.

Knowing every step, every detour, all the characters . . . there is a comfort in this method.

I’m much more of a pantser, but I have used outlines now and then. And, it certainly does offer a sense of security. But, with that said, I love to watch my story unravel before me. I love to watch characters develop and move forward – they kind of write the story themselves. This comes with the pantser method.

It seems though that no matter which style you use, it’s not a guarantee of success or failure.

Gail Carson Levine has some good advice in regard to this, “Quality comes from word choice, plot, characters – all the elements [of a good story].”

Which writing method do you use?

Let me take a look at it. I’m a working children’s ghostwriter, rewriter, and editor. I can turn your story into a publishable book you’ll be proud to be author of.

Shoot me an email at: kcioffiventrice@gmail.com (please put Children’s Writing Help in the Subject line)