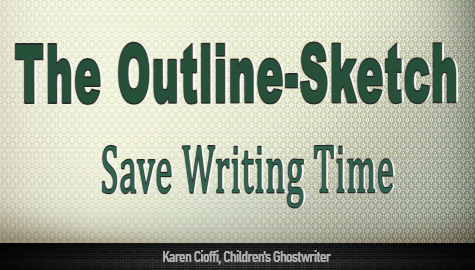 I wrote my next book, Book two in a mystery series for 8-12 year-olds, while making dinner last night. To be more precise, every time my hands were free I jotted down plans for the book in a sketchy outline. Don’t let this boast fool you, though. The one-page outline-sketch came together after the idea for the book rolled around in my head for about a year and after I collected thoughts on note paper and even wrote a detailed, single-spaced typewritten outline, all neatly collected on paper in a file folder.

It’s something I learned from the hours and hours I spent outlining my first book on gobs of notecards, post-its, bubbles on large sketch paper, and yes, a detailed, single-spaced typewritten outline and more. That story took so many unplanned twists and turns while writing it–ideas that were never written down– that for this story I knew there had to be a better way.

Not Every Writer Would Agree

Before I started Book 1, I followed advice on writing a detailed outline from many different sources.

The advice went something like this. An outline can:

– Save you hours of time and effort and even reduce writer’s block.
– Help you work through problems of events and characterizations.
– Give you a blueprint to follow, even give you the advantage of seeing the entire story at a glance.
– And so on.

The wisdom of a well-developed outline didn’t work for me, though. I spent much of my time making many different outlines. I started with, you guessed it, the detailed, single-spaced typewritten outline, painstakingly written over a sizable chunk of time. But while writing, I veered away from that outline. I tried to go back to the outline and rewrite it to keep the story intact to save time. I wound up spending so much time changing the outline that when I got back to the story there were still changes I wanted to make.

It became a vicious cycle. At that juncture, I tried the different methods of getting the outline of the story out: notecards, sketches, etc. When that didn’t work, I gave up on outlines and simply plotted as I went along. That was time-consuming as well. I ended up following a pattern of letting the draft “rest” for a few days, then finding inconsistencies and thinking of new ways to improve the story, some of which involved major rewrites. Much of the time I felt like I was operating in a fog of uncertainty.

Your Book in a Nutshell

Here is what magically appeared on my dinner-time planner:

– The main characters were listed and their roles in the story.
– A clear idea of who the mc is and what flaw or need must be worked out by the end.
– An idea of what the theme will be. It is important to make the theme clear from the start because it needs to be addressed and solved by the end.
– The setting as imagined.
– Scenes which had already been envisioned were sketched out.
– Thoughts on the climax and ending. For a mystery, this is essential. It is the puzzle that your mc must piece together throughout the book. Knowing the puzzle in the beginning should help make the rest of the book fall into place. Also for a mystery, it’s good to have a general idea of how your character solves the mystery.

This is not an exhaustive list and I haven’t figured it all out yet. But I plan on keeping my outline sketchy on purpose! I’d like to write this book in a matter of months rather than a matter of years (as in Book 1). We’ll see if this goal can be accomplished.

If an outline-sketch touches on the main points to be covered and actual writing is the filling, then Story Structure is the skeleton that holds everything together. There are many ways Story Structure is described, from the Story Arc, in which the scenes build tension to the climax and the ending ties up the loose ends quickly in a neat bow; to the Hero’s Journey, introduced by Joseph Campbell in The Hero with a Thousand Faces (1949), according to Wikipedia, and described as:

A hero ventures forth from the world of common day into a region of supernatural wonder: fabulous forces are there encountered and a decisive victory is won: the hero comes back from this mysterious adventure with the power to bestow boons on his fellow man. I keep a copy of the Hero’s Journey in a notebook.

In his book, Story Engineering: Mastering the 6 Core Competencies of Successful Writing, Larry Brooks writes that the single most important word in storytelling is conflict. No conflict, no story. Partnering with conflict is Story Architecture/Structure. No structure, no story, either. Brooks’ six Core Competencies are: Concept, Character, Story Structure, Scene Execution, Voice and the Development Process. Guess which chapter is the longest. That’s right, Story Structure. I highly recommend checking out Brooks’ book and his StoryFix website.

Please leave a comment about your experience with outlines. Do they work for you?

Of course, this post addresses fiction. When I wrote nonfiction articles I followed an outline-sketch I learned from an editor: Answer the W’s in the first and second paragraph and explain the how during the rest of the article; when writing for newspapers, begin with most important information as the ending can be cut off due to space limitations. Worked for me.

Linda Wilson, a former elementary teacher and ICL graduate, has published over 100 articles for adults and children, and six short stories for children. Recently, she completed Joyce Sweeney’s online fiction courses, picture book course and mystery and suspense course. She has currently finished her first book, a mystery/ghost story for 8-12 year-olds, and is in the process of publishing it. Follow Linda on Facebook.

This article first appeared at http://www.writersonthemove.com/2016/07/save-time-try-outline-sketch_28.html

Check out my 250+ page ebook (or paperback) that gives you all the basics of HOW TO WRITE CHILDREN’S FICTION BOOKS. It’s newly revised and includes information on finding a publisher or agent and marketing your books.

Your Author Platform – Is it Ever Too Soon to Start?

Is Your Protagonist Multi-Dimensional?

Fiction Writing – Do It Right