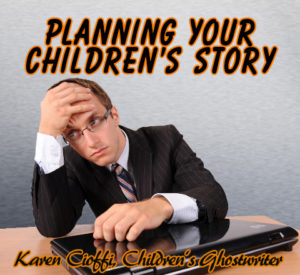 You have an idea for a children’s story, but aren’t sure how to get it started.

Is there a first step?

Is there a step-by-step procedure?

There are lots of questions that may come up for new writers, but there’s really no ‘for every writer’ answer.

But with that said, there are several things that every new writer should know about before jumping in. Those things are the elements of a story.

Sometimes the plot isn’t the very first thing that starts a story. It’s usually an idea for a story.

Once you have the idea, think about how it can evolve, bringing the main character (protagonist) through obstacles to reach his goal. That’s your plot.

In the middle grade book Walking Through Walls, the main character, Wang, wants to become rich and powerful. The goal, how he goes about achieving it (his struggles), and the resolution is the plot.

Plot also involves having the character grow in some way through the process of reaching his goal.

Another important element of plot is to have a beginning, middle, and end to the story. And, it needs to be easily understandable – it needs to make sense.

What I find sometimes as a children’s ghostwriter is that some new authors don’t realize that what they know about their story may not be clearly translated onto the page for the reader.

If you’re not sure whether your missing the clarity mark here, have someone read the story and let you know if they had to pause anywhere or got lost somewhere.

This is the element of writing your children’s story where you make a number of decisions:

A. How will you begin the story?

It’s recommended to start your story with action. Let the reader get immediately engaged and involved.

B. Should you write it in first-person or third-person?

For a quick example of these two point of views (POVs):

-I went to the store. (The main character is telling the story. The first-person pronoun is ‘I.’)

-He went to the story. (A narrator is telling the story. This is third-person and the pronoun is ‘he or she … or it.’)

Note: There are other POVs, but these two are the most popular, third-person being more popular than first-person.

C. What tense will you use for your story: present tense or past tense.

Once you choose a tense, you need to stick with it throughout the story.

Another aspect of POV is that, for children’s books through simple middle grade, there should be only one main character. The story is told through her eyes.

Your story will need a main character who the story revolves around.

It’s important to make this character life-like. Give him depth and personality. He should have good qualities along with a flaw or two. And, bring this character to life as soon as he enters the stage.

The story should also have secondary characters. These characters go with the main character through his journey. They can be supportive and even unintentionally cause problems.

For a children’s chapter book or simple middle grade book, it’d be a good idea to have one or two (at the most) secondary characters. Children’s books should be easy to follow along with. Too many characters can complicate things – like too many cooks in the kitchen.

For a secondary character, think of Robin to Batman or Dr. Watson to Sherlock Holmes. There’s even Ron and Hermione to Harry Potter.

These characters appear in the story for a short period, a scene or two. They’re there for a specific purpose (to move the story forward), but aside from that, the reader doesn’t know much about them.

An example of this would be from Walking Through Walls. The main character, Wang, hit his foot with the broad side of an ax. He was in excruciating pain and called out for help from a fellow student.

The student, not named, explained that he couldn’t offer help. They were to fend for themselves. If they couldn’t do that, they couldn’t help others.

That was the only mention of this character, but it was an important scene. It showed Wang, and the reader, how things worked there.

These are three of the top types of characters. For a full list, visit: https://www.writerscookbook.com/character-types-story/

For information on supporting characters, check out: https://karencioffiwritingforchildren.com/2020/06/21/supporting-characters-and-your-story/

Getting to know your characters:

There are many experienced writers who say you should get to know each of your characters before you start your story.

This is a good idea because it gives you foresight into what a character may or may not do. You will know how that character will react in certain situations and what drives the character.

This provides a comfort level for most writers. It’s like having a well outlined story before actually starting the first draft.

There are other writers who are pantsers. They work from a thin outline if any at all and the characters unveil themselves as the writer writes the story.

I work with outlines, but I’m also a pantser.

I’ll start a story not knowing a thing about the main character or any other character in the story. My typing fingers unveil it all.

On the flip side, as I mentioned there is an element of comfort in having an outline. Even if you don’t have all the details on each character, you know where the story starts, how it will rise to its climax, and how it will be resolved. All you do is fill in the details.

The setting is where the story takes place and the time period. It’s the main character’s surroundings.

In Walking Through Walls, the setting is 16th century China.

To create a realistic setting, if it’s not the present area you live in, you need to do research. Readers want to be absorbed in a story and they want to know that what they’re reading is based on facts, even if it’s a fiction story.

If it’s a science fiction or a fantasy story, then you will need to create your own world. But, be sure it can be understood and is believable.

Speaking of setting and how it can play a crucial part of your story, Wang was 12 years old when he went on his journey to become rich and powerful. He left his family to do this.

In a present day setting, this would most likely be unheard of and unrealistic. But in 16th century China, it was certainly plausible.

Your plot revolves around the story conflict. The conflict provides tension.

Conflicts can be internal or external. They can be caused by the antagonist (bad guy), emotional turmoil, a personal challenge, a physical handicap, troubled relationships, the elements, or other.

Be sure to make your conflict rise to a peak (the climax) – think of a pyramid. At the peak, the conflict lessens on its way down the other side, toward the bottom to a resolution.

A great example of conflict is Toy Story 2. The main characters (Woody and Buzz) make several attempts to overcome their obstacles. They try, they fail. They try and fail a couple of more times before they finally succeed.

The reason this is a great example of conflict is because you don’t want the main character to succeed the first try. You want to see her struggle before she final gets down the other side of the pyramid to resolution.

In children’s stories, the main character becomes the hero in the resolution. He or she has gone through the obstacles and figured out how to reach the goal. The main character is triumphant.

It’s important in picture books through simple middle grade for the main character to solve his problem on his own or with minimal help. Adults shouldn’t be a focal point in the story. If they’re in the story, they should have minimal influence and air-time.

This part of the story should have all loose ends neatly tied up.

The theme of your story is the take-away-value.

It could be that your initial idea is to write a story on bullying or intolerance, or being kind. It could be on mixed-families, on honoring parents, or on sibling rivalry. It could be on anything you feel is important to ‘convey’ children.

The theme is usually something that will help children in their own lives and should be shown subtly. Don’t try to hit the reader over his head with it.

You may not know what the theme is when you first start writing, but along the way it should make itself apparent.

The feel of your story is created by three elements: tone, mood, and style.

According to The Editor’s Blog, “Tone in fiction is the attitude of the narrator or viewpoint character toward story events and other characters. In a story with first-person POV, tone can also be the narrator’s attitude toward the reader.”

How does the character speak? Is he arrogant, does he curse, is he sarcastic, is he sweet, is he bossy? How he uses his words and sentences will show what attitude the character has.

Word choices and sentence structure create tone. And, tone can be “altered by the way the viewpoint character or narrator” reacts to the obstacles he’s confronted with. It can also be altered by how he treats the other characters in the story, as well as how he reacts to his surroundings.

How you want the reader to feel is established through the mood of the story.

Back to The Editor’s Blog, “Mood can be expressed in terms such as dark, light, rushed, suspenseful, heavy, lighthearted, chaotic, and laid-back.”

The mood of the story should change as the main character goes through his obstacles, especially when the story reaches its climax. The reader should feel apprehension.

If you’ve added humor to the story, the reader should smile, feel lighthearted.

This is how you use your words to create the story and the story’s feel.

For Walking Through Walls, I chose words and sentences that would fit with 16th century China. I eliminated contractions from the dialogue. The characters spoke formally and were respectful.

I used this style choice based on the time period and it gives the story an authentic ‘flavor.’

So, it’s easy to see that style is dependent on the story topic.

Every writer has her own unique style, but it can be altered to fit the circumstances of the story.

Say you have a secondary character like “young Sheldon,” who is in college classes at around ten years old. His speech will differ from a boy the same age, who is struggling with fifth grade reading. Sentence structure and reactions would vary from boy to boy.

Style is used to create tone and mood.

The tone, style, and mood of your story is what makes it unique to you.

For a lot more on this writing element, check out: Tone, Mood, and Style – The Feel of Fiction

So, going back to the very first question in this article, the first step of planning a children’s story is to know what’s involved in creating a good one.

Whether you need rewriting or ghostwriting, or coaching, let me take a look at your story. Just send me an email at: kcioffiventrice@gmail.com. Please put “Children’s Writing” in the Subject box. Or, give me a call at 347—834—6700

Let’s get your idea off the launch pad or your outline into a publishable story today!

Writing Skills – Spread Your Wings
“Don’t let the enormity of the project stop you—write one page at a time.”