From the simplest clues, a character can take shape.

Maybe you first reference the character as the boy or the tall girl. Even with those simple words, you’ve given that character life.

Before that, there wasn’t a boy or a tall girl.

But there are a number of things you should avoid when writing your characters.

An example of this might be: Raul was tall and thin with green eyes and dark brown hair and a swimmer’s body.

While you won’t be able to get that all in within one scene, to convey his height you might write:

When the other boys couldn’t reach the shelf, Raul got the paper airplane down. “Good thing you’re tall,” said Shawn.

To convey his hair color:

From the back, Mrs. Stenzer couldn’t tell which boy was Raul. They all had dark brown hair and were medium height.

To convey his body type:

Raul was the only new kid on the swim team to already have a swimmer’s body.

If you need or want to let the reader know the physical characteristics of the characters I n your story, simply work that information in. Without dumping it.

While you don’t need to convey every detail of a character, you can give enough to give the reader an idea of the character’s physical attributes. The reader can then fill in the details.

His neat cut in the back and sides was in contrast to the long hair in front that fell below his brows.

He stretched his swimmer’s body then raced into the ocean.

A character may live in a low-income building, possibly a Section 8 apartment. Another may live in the back woods of Appalachian Mountains. All this will give insight into the character.

A book I’m writing now has one of the characters going from a rich lifestyle to a poor one. This could tell a lot about why the character may behave in a certain way or why she’s depressed.

Another scenario may be that the protagonist was on a swimming team since he was seven. This will tell a lot about this teen’s character. It takes discipline and drive to be a competitive swimmer. It will also have a large factor on his physical appearance.

How your character engages with the different people in his family, friends, and toward new people will show different facets of his character.

The friends he hangs around with will also show his tendencies and character. The expression ‘birds of a feather flock together’ can play a factor in the character’s character.

How you describe your character’s appearance can tell a lot about that character.

What about her hair. Is it a mess? Does it look dirty? Or is it well groomed?

What about his hair? Is it short? Is it long? Is it well kept?

What does she keep in her pockets or purse? What does he keep in his backpack? Is there always a pack of gum? Is there breath mints? Do they always have a candy bar on them? What about a comb?

The list can go on and on. And, each little item give another clue as to the character’s character.

These are just five tips on how to use description to enhance your readers’ view of your characters. There are others, but this should give you a good foundation on creating engaging characters.

WANT TO BE A CHILDREN’S WRITER?

Check out my 200+ page ebook (or paperback) that gives you all the basics of HOW TO WRITE A CHILDREN’S FICTION BOOK. It’s newly revised and includes information on finding a publisher or agent and marketing your books. 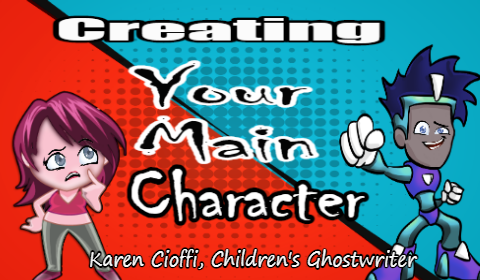 I read an excellent article by Jerry Jenkins who is an author of more than 186 books and a New York Times bestselling novelist. This is a writer who knows about writing.

The article was about creating memorable heroes.

Every author wants to be able to do this. So, below are the first few tips Jenkins offered (I put my own spin on these tips and made them relevant to children’s writing. And, since it’s a long post, I divided it into two-parts):

I’ll use my middle-grade fantasy book, “Walking Through Walls”, as an example.

The story is set in 16th century China.

What names come to mind?

If you want to keep the flavor of the story true, you’ll need to use appropriate names. The MC in “Walking Through Walls” is Wang.

You’ve got to get your MC out there in front of the audience right away.

You don’t want any confusion as to the MC. You want your reader to make a connection quick. The MC should be the first character introduced in the story.

This is especially true with young children’s books.

3. The reader should be able to picture the main character.

Just give enough information for the reader to be able to imagine what your MC looks like.

Is he tall? Is she fair or dark? Is she thin? Does he have any unusual characteristics?

You want the reader to be able to picture him – to create her own image of him. Whatever information you leave out, the reader will fill in.

Okay, this isn’t relevant to picture books as they’re too short for backstory. But, with other stories, the MC needs to be realistic and this means he needs a life.

This was done within the first couple of pages.

Other aspects of your character that might be conveyed are:

The list can go on and on. Use the qualities or characteristics that are relevant to your story.

I wrote an article a few years ago about your character being one, two, or three dimensional.

You need a three-dimensional character.

Along with this, he needs a mutli-faceted personality. What I mean by this is, a boy will act differently with his brother, his friend, a girl he’s sweet on, his teacher, his coach, his mom, his dad, and so on.

Our personalities are able to adapt to the interactions we have. You don’t want a MC who acts the same with all secondary characters and in all situations. He needs to portray realistic feelings and reactions.

While your MC needs to be human / flawed, he also must learn from his failures . . . from overcoming the obstacles thrown in his way.

I love the way Jennings put this, “While striving to make your main character real and human, be sure to also make him heroic or implant within him at least the potential to be heroic.”

When writing for children, especially young children, the MC must prevail. He needs to overcome his obstacles and end up smarter, stronger, wiser, happier. Whatever the growth is, it’s got to be there.

Going back to Wang, while he’s kind of a slacker, he feels a need to help his friend even though it would mean fighting against warriors. There’s more to the story to make him heroic, but just wanting to help a friend in need is enough.

Reference:
10 Tips to Developing Your Characters

BEEN THINKING ABOUT WRITING YOUR OWN CHILDREN’S BOOK?
Check out FICTION WRITING FOR CHILDREN The One Sentence Pitch for Your Manuscript