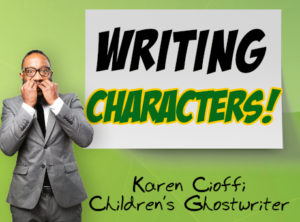 Many characters inhabited the early drafts of my WIP: a MG mystery. Like many of my characters’ counterparts—kids—I assigned each character a “friend,” following the example I’d seen so often of kids going around in “packs.”

What fun I had! The snappy dialogue! The endless opportunities to showcase what was on everybody’s mind! And oh, the ballooning plot–sensational! Until along came an editor who, with utmost gentleness and understanding, gave me a reality check.

Each Set of Friends Morphed into One Character

Whoa! Cut! My editor suggested I settle on one character for each set rather than have two: one sidekick for the main character, not two. One antagonist, not two. One little brother, not a little brother and his friend. I edited out the “doubles,” the “extras”, and though it was painful eliminating the “friend” appeal I had created, it did clean up the story—a lot. But there was still work to be done.

Each Character Must have a Role

In narrowing down the number of characters in my story, a few things happened.

– Though my MC’s sidekick lacked other girlfriends, their relationship became stronger.
– There were fewer distractions; that held true for the antagonist and the little brother, too.
– And then . . . I was told that the little brother would have to go. She knew this would be difficult for me. I loved this character dearly. I had rounded him out so well and he was funny. But that wasn’t enough.
– So, I gave him a role. In the beginning he plays a prank on the main character. For the rest of the story, he faded back into the background. Still not enough, she said.

Each Character Must have Follow-Through

Now it’s your turn to make sure your characters have roles throughout your entire story. You do that by creating a story arc not only for your main character, but for each one of your characters.

To use the bigger role I assigned to my little brother character as an example:
– When he first appears, he brings up the mystery.
– Early in the book, he plays a prank on the main character, which is directly related to the plot.
– A little later, he teases her about the prank.
– Still later, he takes part in one of the main character’s adventures.

And two things were added to top it off near the end:
– He possesses a secret of his own that he brags about to the main character and her sidekick, which is eventually revealed, and . . .
– He receives a surprise of his own.

One way you can accomplish this is to highlight your characters’ actions with different color highlighters to make sure they are not forgotten in any section of your book. While creating the story arcs for my characters, I found the dog in my story had disappeared for about thirty-five pages. I went through that section and added him in where he fit, and when he was gone from the story, showed an explanation for his whereabouts. This must be done for each character. And, for recurring items such as a key, a flashlight or a locked door, items I had to check and re-check to make sure mention of them was accurate.

A Word about Multiple Points of View

Editors say that new writers should shy away from attempting multiple points of view. They say it takes experience and skill to pull this off. A good example applies to an adult novel from Audible I recently listened to, which was told in two sisters’ alternating POV’s. There were problems. First, their names were similar, perhaps because they were sisters. I had difficulty jumping from one to other and felt confused about who was who.

The other problem was that unfortunately, I didn’t care about the sisters. The author hadn’t, in my opinion, spent enough time allowing me to get to know each of them. I almost didn’t finish the book because it became tedious rather than enjoyable.

One of my writing instructors dislikes multiple points of view because of this problem. She believes in having one main character that you as the reader can get to know, love and “get into her head” so that you experience what she experiences throughout the book.

Personally, I find novels told in multiple POV’s refreshing. I’ve enjoyed sinking myself into more than one character. But I agree with my instructor: it has to be done right. And as a beginner, I don’t plan to venture there until I have a lot more experience under my belt. But I do plan on highlighting my characters’ arcs and making sure they have ongoing roles tied to the plot. Linda Wilson, a former elementary teacher and ICL graduate, has published over 100 articles for adults and children, and six short stories for children. Recently, she has completed her first book, a mystery/ghost story for children 7-11 years old, and is hard at work on Book Two in the series. Follow Linda at http://lindawilsonauthor.com.

This article was first published at:
http://www.writersonthemove.com/2018/04/avoid-these-common-mistakes-in-creating.html

Check out my 170+ page ebook (or paperback) that gives you all the basics of FICTION WRITING FOR CHILDREN. It’s newly revised and includes information on finding a publisher or agent and marketing your books.